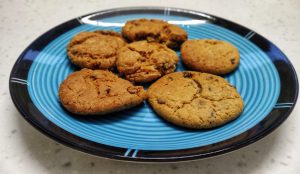 Last weekend, my 2 kids, aged 10 and 6, decided that we ought to bake some chocolate chip cookies.

Now, I am no expert at baking. I have used my oven mainly to store my oversized cooking vessels rather than actually baking anything in it. Fearing that embarking on this ambitious project would only end up with a disaster in my kitchen, I tried valiantly to dissuade them with offers of a quick trip to the local bakery instead, to purchase their choice of goodies. “It is very difficult to bake cookies, let’s just go and buy them”, I pleaded. I don’t even think they paid any heed to my counter offer. When they started pulling out eggs and butter from the refrigerator, I gave up trying to stop this madness and instead decided to jump into it myself. It had been definitely decided that cookies had to be baked that afternoon. The least i could do was try and contain the damage by taking charge.

We did what was the obvious first and foremost important step — whip out the laptops and mobile phones and go searching online looking for that perfect recipe. After nearly an hour of heated debates based on comparisons of raw materials, final product specs, process complexities, turn around times etc., we settled on a tried and tested recipe that seemed to be well suited to novice bakers like ourselves.

What I really liked about this recipe –

And so we started off with a hustle and a bustle and after about 45 minutes of culinary adventures guided by our trusted recipe, freshly baked delectable soft brown cookies emerged from the oven.

I was pleasantly surprised to see that not only did the cookies appear to be perfect, they also tasted heavenly. Now I am not exaggerating for the sake of this article, the cookies actually tasted really really good. And each and every one of them came out a perfect brown with a soft chewy inside. To top it all, there had been absolutely no mishaps at all. My kitchen was safe and sound.

The skeptic in me was simply blown away.

A faithful adherence to the process document aka the recipe, was able to make bakers out of our motley crew. It had also given me the confidence now to take on the next baking challenge.

Just as the recipe guided us, walking us through every step of the process, an organisations’ process documents should also have the power to enable the team to get the job done. It should motivate people to try new things because they know where to look for the manual.

A larger organisation is probably more invested in creating and maintaining process documents, but the smaller ones typically tend to avoid this as an unnecessary overhead. But irrespective of the size of the company, a common collective understanding of the processes leads to better synchronisation within the team which is a much needed ingredient for growth.

Going by the cookie-baking experience, I would say that process documents should follow these golden rules –

Writing out a process document is certainly not an exciting task. But it is probably the most important one that should be undertaken. The benefits of a well documented process far outweighs the excuses that come up.

So go on! Take a look in your company’s recipe box to see if all recipes are being used, add some of your own touches and create a few more recipes of your own.